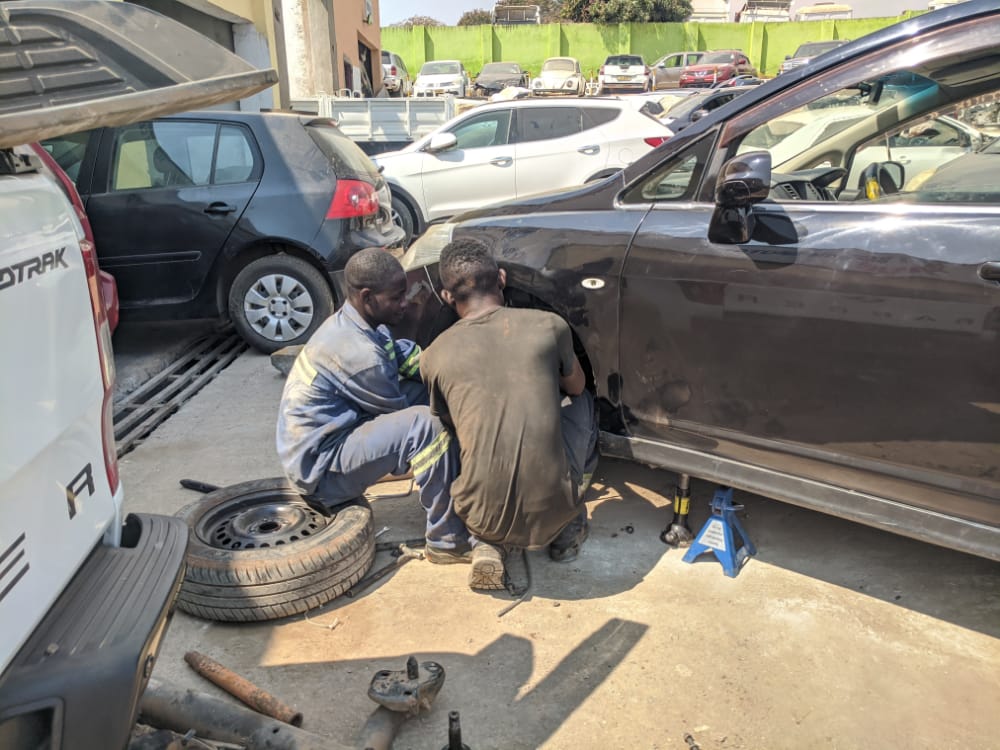 This is a LifeNets story showing our support to train young people for careers that will make it possible for them to sustain themselves in a difficult economic environment.
Report below from Dan Ringo, LifeNets Business Manager for Blantyre, Malawi.

This week, I paid James a visit at his training/working site and thought of sharing his story with you.  As you may already know, James has been a beneficiary of LifeNets Intl since his secondary school days. In course of pursuing his dreams of becoming a mechanic, he has had no other support other than the one offered by LifeNets. 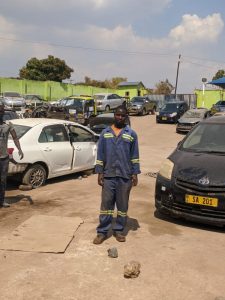 James at the garage

James is being funded by LifeNets in his training as a motor vehicle mechanic.

Even though it is the norm of this society that for one to be successful in certain field or profession, he/she has to go to school, earn a certified paper for his qualification and stand out among the cloud, however there are some who defy this norm by practically pursuing their dreams and be successful even more than those with academic papers in the same field because of their hardworking spirit and determination. James is set out to defy this norm.

Until now, James has spent all his life in one of the remotest village in Zomba. He used to visit the city during church functions accompanied by his parents. In his village, going further with school is a challenge, poverty being one cause, but also for the fact that, in many villages like this, they lack some essential services like education and health facilities. If any, they can not be compared with those received in urban areas. Child marriages and school dropout is very common in such areas.

Lucky enough James passed his primary school exams and made it to Secondary school, that's when LifeNets begun sponsoring him. The challenge that James was facing at this level of education was "English". Although Malawi is a multilingual country, with more than ten indigenous languages, the main language used in the country's educational curriculum is English. The same curriculum is enforced at primary school level only that many lessons or topics can be memorized and answered in the same way they are taught but at secondary school you are required to mostly apply your own knowledge of understanding in most of the subjects during assessment. With James' foundation he was not well equipped for this part but giving up was a word missing in his dictionary. 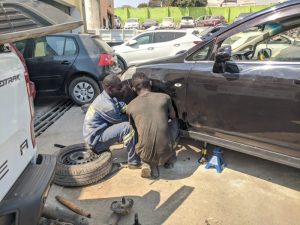 It is a busy place with so much work to do. An ideal environment for learning. says James

There came a time that James was listed among the students that LifeNets was considering to revoke their sponsorship due to poor grades, the only thing that saved him was the remarks given by his teachers at the time that a LifeNets' staff visited his school, his form teacher said "James is a hardworking student, he concentrates during lessons and he is a hard working boy that he never misses any given assignment but the problem with him is he has difficulty understanding and writing English, apparently he has had poor foundation, he just have to study hard

James did not qualify to be enrolled at a technical college but that did not shutter his dreams of becoming a motor vehicle mechanic. He applied for scholarship in his desired field of study. Upon considering his needy state, arrangements were made with a well known motor vehicle service center in the city which is owned by a successful youthful man who do not only pose as a role model to aspiring mechanics but he is also good at this business. The agreement was that James should undergo an on hands training with the service center for a period good enough to make him a legible mechanic. Terms of agreement were set. Thanks to LifeNets, now James has clocked a year with the motor vehicle service center and is already able to do repairs and fix vehicles with minimum supervision

Brown Motors is one of the well k ... service centers in Blantyre

"I did not want to just sit home and be a burden to my already financially challenged father, that's why I applied for support from LifeNets, other than LifeNets I had no one to look up to. I really want to learn this job and God willing, open my own garage in future" said James when asked the reason why he still applied for sponsorship fully knowing that he was not qualified to be enrolled at government's vocational and technical colleges. "I failed to do well at secondary because because I had difficulties in understanding a lot of things in English not that I was lazy, but it's different with the training that  I am receiving here. Everything I learn here is practical.

I also had a privilege to chat with the owner of the service center Mr Brown, who also happens to be the manager of the service center. In his own words he said James is not only a hard working boy but also humblest of his employees and he looks forward to give him full time employment after his training is over. Added to the training James is given food and transport for every five working days by the manager. 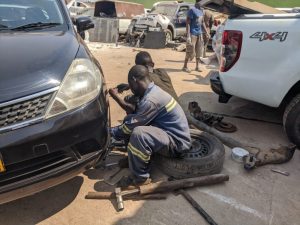 James Changing brake pads for one of the customer's vehicle

I thank LifeNets for not giving up on me says James Namatapanya, the mechanic in making.