The mission of The Hoosier Coefficient, which appears on ePrairie every Thursday, is to profile the often-overlooked rich technology development and commercialization in Indiana. The Hoosier state is home to four of the top technology research and engineering universities in the nation and tech pros ignore Indiana at their own peril. 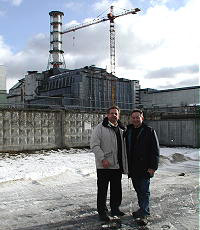 Victor Kubik (left) and Vasyl Pasechnick, the doctor running the clinic for Chernobyl children in front of the now-closed Chernobyl nuclear power plant.INDIANAPOLIS – A “positive void coefficient” was the tidy phrase they used to describe the unspeakable nuclear conflagration that erupted out of the No. 4 reactor at Chernobyl 20 years ago.On this date back then, thousands of tons of airborne strontium-90 and other radioactive isotope particulates were drifting lazily across the then-Soviet Union and parts of Eastern Europe as Soviet administrators began day three of the disaster with renewed official denials that the thundering radioactive fires represented anything but a “minor incident”.

Though they didn’t know it, hundreds of firefighters and Soviet soldiers were already sentenced to a gruesome death: they were lethally saturated with gamma radiation streaming from the sparkling blue molten fuel rods.Years later, U.N. and other officials estimate that more than 100 times the radiation from the Hiroshima blast was released on April 26, 1986 with the true effects still not known. In a twisted turn of events, the aftereffects of Chernobyl are today intensely studied by U.S. Homeland Security experts as the reactor blast now serves as a macabre model for the possible repercussions of a terrorist “dirty bomb.” Intense media coverage followed the days immediately following the disaster as the Gorbachev administration reluctantly disclosed the extent of the catastrophe and even solicited Western aid. After a few weeks, the media – together with much of the world – turned their attention elsewhere.Despite increasing leakages and unstable structural issues, the shuttered nuclear facility today represents a growing tourist attraction.

The nearby abandoned city of Pripyat and other official radioactive “dead zones” now attract regular visitors and commentary about the hazards associated with atom-focused electrical generation.Despite the faded media attention, severe health issues began materializing around the Chernobyl area particularly in children born in the years following.Perhaps most horrific of all, young girls exposed to Chernobyl radiation (who later became mothers in the 1990s) started showing up with “germ line” mutations: changes in the DNA of sperm and human eggs. Warned Denise Adler, a radiation expert at the University of Geneva in Switzerland: “Genetic defects may remain hidden for several generations. We have to expect more.” 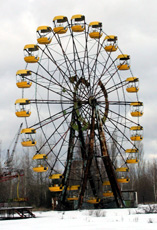 This highly radioactive ferris wheel in Pripyat has become a symbol of the Chernobyl devastation. It will never be ridden again.Pediatric thyroid cancer levels exploded in the years following the explosion. Radiation-related children illnesses increased to the point where the BBC reported that four out of five children living in Chernihev (a city of 250,000 near Chernobyl) suffered from some Chernobyl-influenced malady.As the pediatric cases mounted up, available health-care resources in the Ukraine were quickly outstripped particularly in the years following the breakup of the former Soviet Union. For helpless and largely forgotten children victims of the nuclear disaster, the future looked increasingly grim.On a visit to England 10 years after the explosion, Indianapolis resident Victor Kubik (a second-generation Ukrainian and U.S. citizen) learned from a retired British pediatrician of the growing problem.The pediatrician, Morris Frohm, was joining other British medical professionals to try to assess the real situation.

Kubik, who was born in a World War II German relocation camp before emigrating to the U.S. with his parents, still had family living in Ukraine. Knowing the culture and language, he impulsively volunteered as a translator.“I was horrified at the news of all of these children in overcrowded hospitals,” Kubik recalled for ePrairie. “I just had to do something.”Pleasantly surprised, the pediatrician agreed and the two made plans. A few months later, the pair stepped off a plane in Kiev and Kubik’s life was changed forever. Evidence of economic chaos from the breakup of the Soviet Union was everywhere (Ukraine was now an independent county).

What immediately caught Kubik’s eye were little black boxes in public buildings and walkways.While Kubik first thought they were modified clocks to display time and temperature for the region, they weren’t. Instead, they represented the sinister presence of Chernobyl as they measured and displayed microrads from airborne nuclides (even a full decade after the reactor exploded). He added: “People living in Ukraine were thus reminded every day of what they were living in. It was depressing.”What was even more depressing was the Ukrainian hospitals filled with sick children in some cases to double capacity. Kubik, whose full-time job is that of a pastor and administrator with the United Church of God, felt “overwhelmingly compelled to do something,” he said.

He and the British pediatrician were introduced to a pediatrician from the Chernobyl area named Vasyl Pasechnick.Pasechnick, who was later decorated for bravery, drew official Soviet ire immediately after the Chernobyl explosion when he publicly called for massive distribution of iodide (particularly for the children living in the area). Had his public plea been heeded, absorption of the iodide would have reduced radiation poisoning of the children’s thyroid glands. He was muzzled and disciplined, though, by Soviet authorities trying to contain news of the explosion.

Ten years after the nuclear disaster, Pasechnick was struggling to build and run a children’s clinic to deal with the rehabilitation nightmare of hundreds of children trying to overcome the latent effects of the blast (both physical and psychological).Kubik, a self-professed technology geek, set out with his wife, Beverly, to help Pasechnick. In the early days of the commercial Internet, Kubik taught himself enough HTML code and Web authoring skills to put up a Web site to attract attention to Pasechnick’s center, which is now called The Revival Centre.Working the phones to build a network and scouring federal documents, Kubik and his wife found a means to ship critically needed medical supplies to the center.

Battling bureaucratic delays, customs issues and outright graft by government employees, Kubik, his wife and a growing band of volunteers managed to ship more than $1 million in supplies to Pasechnick.Kubik subsequently brought Pasechnick over to the U.S. in the late 1990s to meet other medical professionals at St. Jude’s Hospital in Nashville, Riley Children’s Hospital in Indianapolis and other major medical operations specializing in children.On this trip, Pasechnick and Kubik were invited to meet Indiana First Lady Judy O’Bannon.

The meeting turned into a partnership: “I was quite taken with both the Ukrainian doctor and with Vic,” O’Bannon said. “Victor profoundly struck me as a true servant leader and someone who could do a lot of good for people.”The meeting spawned the founding of a new humanitarian organization in Indianapolis called LifeNets International. With the help of the Internet, Kubik now serves dozens of humanitarian projects around the world from his Indianapolis home.

Largely through the direct support of this organization, the Ukrainian center has grown to serve hundreds of Chernobyl-affected children. Kubik will return to the center in June for its 10th anniversary. Joining him this time will be several Ukrainian government officials and the British ambassador to the Ukraine to recognize what a difference one selfless human being can make. Michael Snyder is principal of The MEK Group, a marketing and business development consulting firm that provides communications-driven strategies to increase market share, enhance productivity and build distinctive brand awareness. Snyder can be reached at msnyder@themekgroup.com.