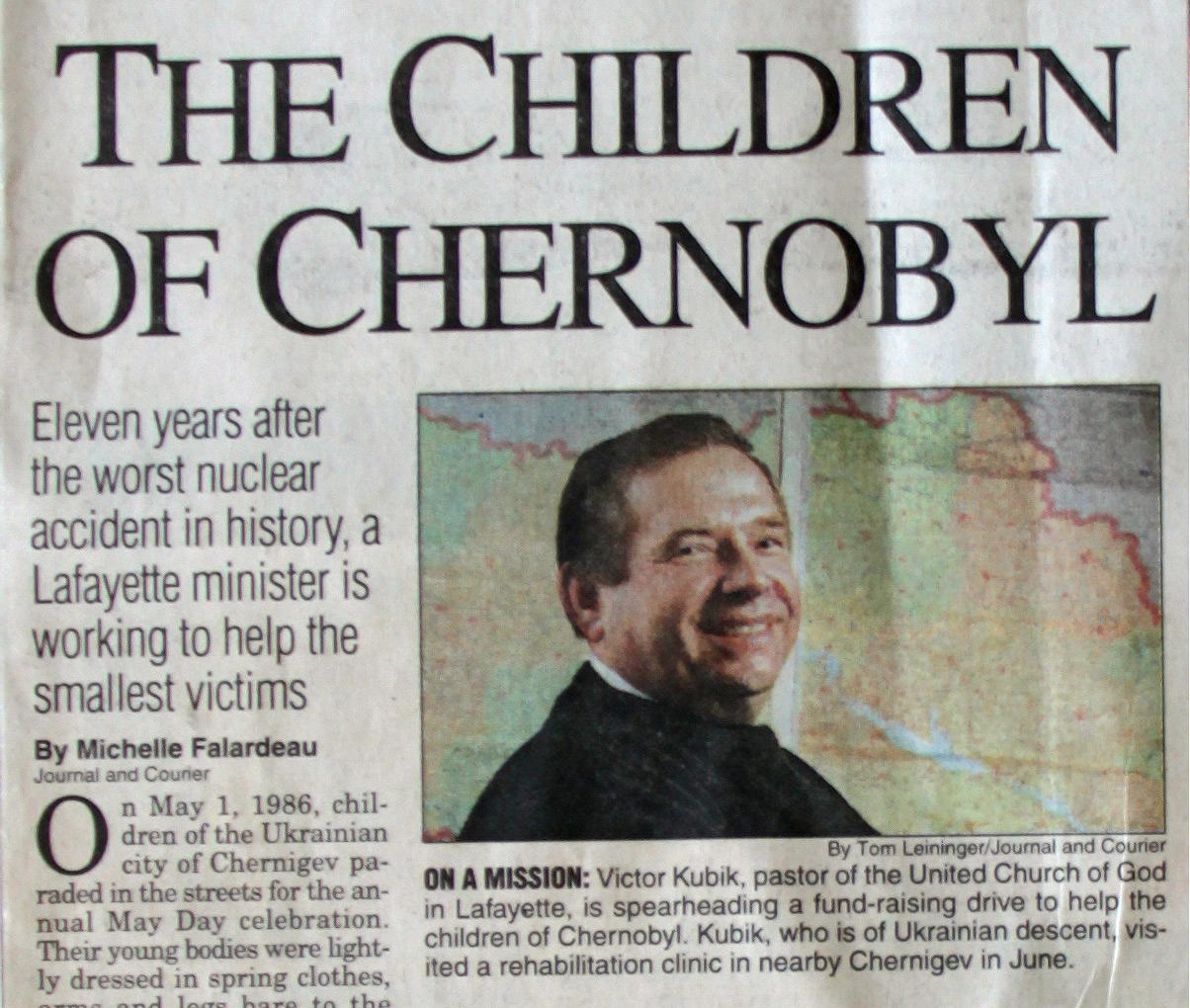 Since 1995 I have been involved in helping children in the Chernobyl, Ukraine area. More specifically providing help for the "Revival" Centre of Rehabilitation of Disabled Children in Chernihev, about 30 miles due east of Chernobyl. This involvement actually led to the incorporation of LifeNets in 1999 and began a wonderful run of projects to help the vulnerable and disadvantaged in some areas through LifeNets.

This is an article that appeared in the weekend Lafayette Journal and Courier by Michelle Falardeau.  We thank her for her making this a feature story at that time -- about 20 years ago.  More on LifeNets in Chernobyl at https://lifenets.org/chernobyl.

The article is legibly posted below. 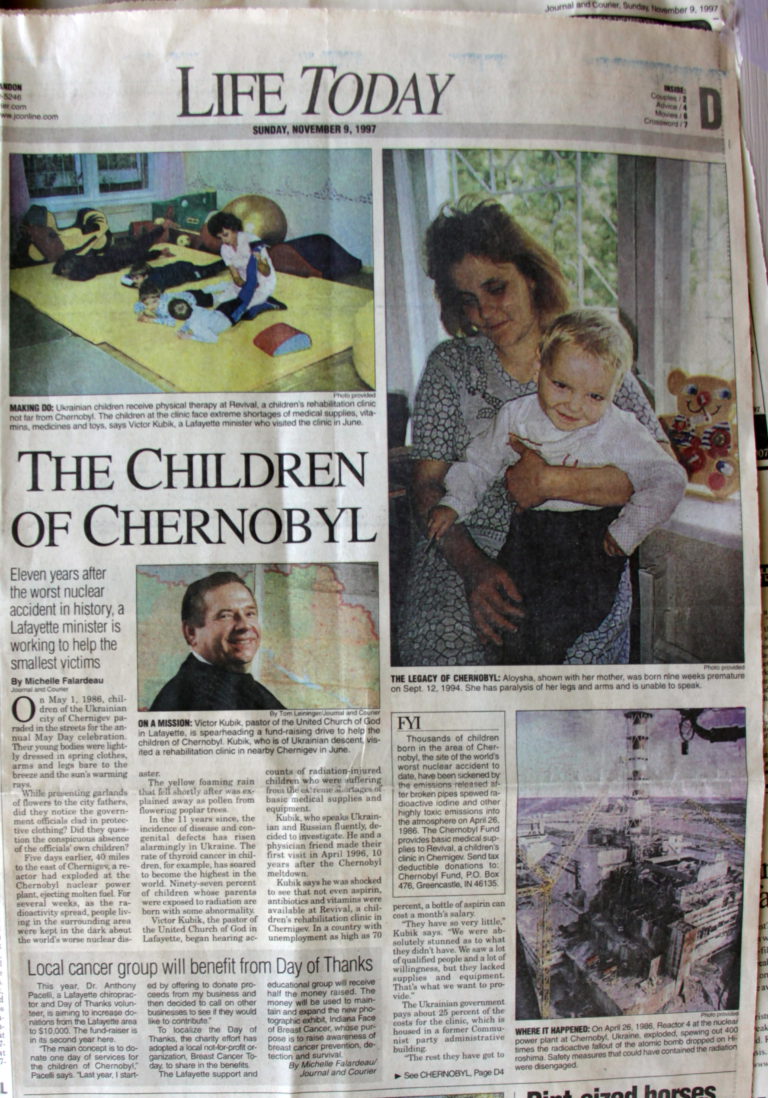 The Children of Chernobyl

(From the Lafayette, Indiana Journal and Courier, Sunday, November 9, 1997)

Inset: Eleven years after the worst nuclear accident in history, a Lafayette minister is working to help the smallest victims.

On May 1, 1986, children of the Ukrainian city of Chernigev paraded in the streets for the annual May Day celebration.  Their young bodies were lightly dressed in spring clothes, arms and legs bare to the breeze and the sun’s warming rays.

While presenting garlands of flowers to the city fathers, did they notice the government officials clad in protective clothing?  Did they question the conspicuous absence of the officials’ own children?

Five days earlier, 40 miles to the east of Chernigev, a reactor had exploded at the Chernobyl nuclear power plant, ejecting molten fuel.  For several weeks, as the radioactivity spread, people living in the surrounding area were kept in the dark about the world’s worst nuclear disaster.

The yellow foaming rain that fell shortly after was explained away as pollen from flowering poplar trees.

In the 11 years since, the incidence of disease and congenital defects has risen alarmingly in Ukraine.  The rate of thyroid cancer in children, for example, has soared to become the highest in the world.  Ninety-seven percent of children whose parents were exposed to radiation are born with some abnormality.

Victor Kubik, the pastor of the United Church of God in Lafayette, began hearing accounts of radiation-injured children who were suffering from the extreme shortages of basic medical supplies and equipment.

Kubik, who speaks Ukrainian and Russian fluently, decided to investigate.  He and a physician friend made their first visit in April 1996, 10 years after the Chernobyl meltdown.

Kubik says he was shocked to see that not even aspirin, antibiotics and vitamins were available at Revival, a children’s rehabilitation clinic in Chernigev.  In a country with unemployment as high as 70 percent, a bottle of aspirin can cost a month’s salary.

“They have so very little,” Kubik says.  “We were absolutely stunned as to what they didn’t have. We saw a lot of qualified people and a lot of willingness, but they lacked supplies and equipment.  That’s what we want to provide.”

The Ukrainian government pays about 25 percent of the costs for the clinic, which is housed in a former Communist party administrative building.

“The rest they have got to find elsewhere,” he says.  “They could use any kind of thing, from gloves to syringes to robes.  It costs $125 a month to keep each child at the center.  It is unbelievably cheap.  The total center operation is $70,000 a year.”

Kubik is spearheading Day of Thanks, a campaign to raise money and to gather medical equipment and toys for the children’s medical clinic in Chernigev.

Volunteers are asking local business to pledge a portion of the day’s proceeds from the Wednesday before Thanksgiving.  Individuals are also encouraged to contribute.

Money raised will be used to purchase medicines and vitamins from pharmaceutical companies at just 6 percent of wholesale, Kubik says.  Last year, the charity sent $250,000 in medications and equipment.

“For every dollar we receive, we can leverage it 40 times,” he says.  Supplies are transported free of charge in 20-ton containers through a foreign aid program.

During Kubik’s most recent trip to Revival, clinic staff asked repeatedly for developmental and soft toys for children.

“They could use a whole dental setup at the children’s hospital,” he says.  “Their equipment is so pathetic.  I saw a child sitting in a dentist chair that is falling apart.  It had been recovered and recovered.  All the soft padding is gone.  It was so sad to see them working on this poor little child.  The chair really needs to be dumped.  It probably already had been in the United States.”

Some excerpts from the diary, which can be found on Kubik’s Web site https://lifenets.org/chernobyl.

“People fishing nearby saw the roof on fire and went to see out of interest.  Still nothing on the radio.  Tomatoes were exceptionally good and beautiful in 1986m but it might have been the hot summer.  It was thought that a skull X-ray would protect against the effects of radiation.”

Kubik says researchers can’t tell whether an individual case of cerebral palsy or cancer is a result of the Chernobyl disaster.  But statistics do show that cancer and other illnesses have risen dramatically.  As many as 800,000 children may have been medically or emotionally harmed, either through direct contact or from chromosomal damage occurring in the parents before conception.  In addition they learned:

Frohn concludes the diary, which is dedicated to three Ukrainian doctors “ and all those others who did not run sway,” with these words:

“Victor and I have been to hell and back, but we also found heaven.  We found that the human spirit can survive the most evil of environments.  When we argue among ourselves and grumble among our comforts, we should say the names of the radiated chidren: Olga, Vitaly, Lena and Yuri and tens of thousands more.”

Inset: Local Cancer group will benefit from Day of Thanks

This year, Dr. Anthony Pacelli, a Lafayette chiropractor and Day of Thanks volunteer, is aiming to increase donations from the Lafayette area to $10,000. The fundraiser is in its second year here.

“The main concept is to donate one day of services for the children of Chernobyl,” Pacelli says.  “Last year, I started by offering to donate proceeds from my business and then decided to call on other businesses to see if they would like to contribute.”

To localize the Day of Thanks, the charity effort has adopted a local not-for-profit organization, Breast Cancer Today, to share in the benefits.

The Lafayette support and educational group will receive half the money raised.  The money will be used to maintain and expand the new photographic exhibit, Indiana Face of Breast Cancer, whose purpose is to raise awareness of breast cancer prevention, detection, and survival.

Photo Description (right):
The Legacy of Chernobyl: Aloysha, shown with her mother, was born nine weeks premature on Sept. 12, 1994.  She has paralysis of her legs and arms and is unable to speak.

Photo Description (middle):
On a Mission: Victor Kubik, pastor of the United Church of God in Lafayette, is spearheading a fund-raising drive to help the children of Chernobyl.  Kubik, who is of Ukrainian descent, visited a rehabilitation clinic in nearby Chernigev in June. 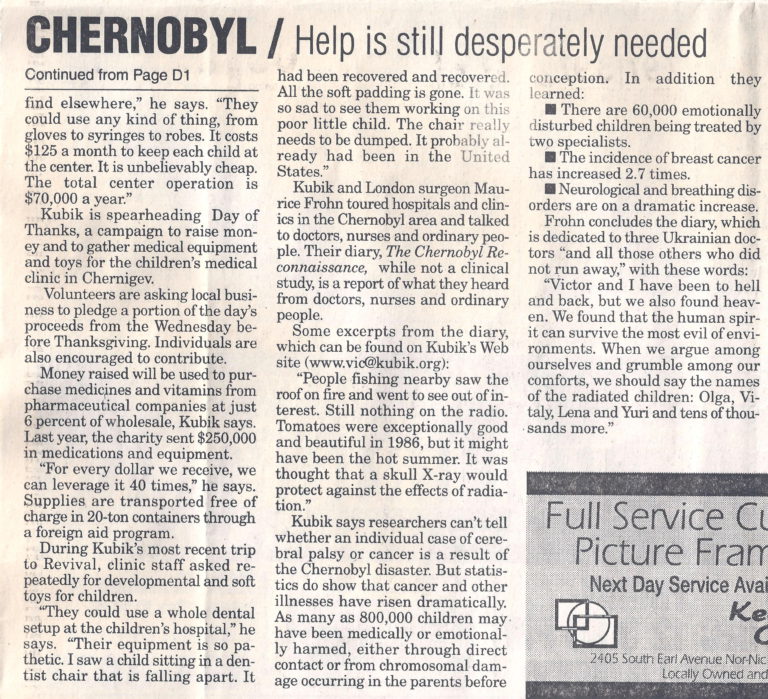