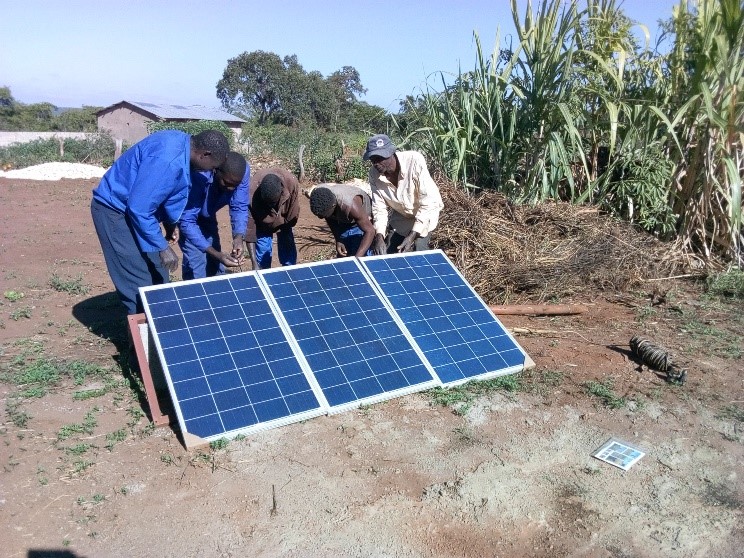 REPORT OF THE BUILDING OF A SECURITY WALL FENCE AND RE-INSTALLATION OF SOLAR-POWERED WATER FACILITY, UNITED CHURCH OF GOD, aia, CHIPATA, ZAMBIA

Prior to August 2017, over two hundred rural families in Chipata, eastern Zambia, had no access to clean and safe water for domestic use. Women woke up at cockcrow and travelled long distances to join very long queues even to get dirty and contaminated water. Luckily, in August 2017, the United Church of God aia, through LifeNets, drilled a deep, solar-powered  borehole to supply clean and safe water for drinking and domestic use to these people.

For one year five months, this clean and safe water was available freely to the surrounding rural households irrespective of religious denomination. The local church also took advantage of this facility to train the youths who had dropped out of school in basic vegetable production. The aim was to give them a survival skill and thereby keep them away from immoral and criminal activities.

In addition to tailoring, women also underwent a series of short courses on conservation farming, especially on simple farming technologies like crop rotation and compost-making. These technologies were aimed at gradually healing the soils which were mostly depleted due to wrong farming practices. When done faithfully, the level of crop nutrients was bound to improve, within a few years, resulting in improved crop yields.

Unfortunately, just when these projects were gaining momentum, on the night of 29 January 2019, this useful water facility was vandalized. Taking advantage of heavy night rains, thieves broke into the church hall and took away all the curtains and some of the furniture. They also raided the water facility and wrecked many things as they dug up the steel platform to reach the solar panels. They also took away the cables and fittings. In one night, this one senseless act of vandalism sent the poor community back to its previous state of waterlessness!

When this was reported to LifeNets and the Home Office, the whole family of the United Church of God, aia, was shocked. Without wasting time, LifeNets and Good Works pooled their efforts to launch an urgent appeal for donations towards the quick replacement of the water facility. However, it was decided that before the facility could be replaced, there was need to build an enclosure to minimize any ill-intentioned access to the premises in future.

The Church hall and water point sat on opposite corners of one acre of land (4,900 square meters) which was donated to the Church by Chosiwe Shanzi Jere in 2016. Good sense dictated that both the church hall and the water point be under one enclosure; which required 7,200 cement blocks for a twelve-course wall. LifeNets and other fund-organizers emphasized the need to reinforce this wall with electric protection against illegal entry in addition to employing two night watchmen.

All this indicated the need for a huge amount of money. However, by March 2019, a good amount of money had been raised to replace the solar facility and build the wall fence. Immediately upon receipt of these funds, the Chipata Works Committee of the church purchased 9,000 cement blocks, 600x50kg pockets of cement and other necessary building materials.

Prior to the break-in, eight viable male members of the Church had been undergoing a short course in basic bricklaying. These men immediately volunteered to build the wall because engaging private bricklayers would have consumed half the donated funds. Subsistence requirements were provided for this workforce, including food, toiletries and work clothes.

Despite the onslaught of mosquitos and other discomforts, the team slept in the church hall and worked six days a week, from Sunday to Friday. In the evenings after supper, they conducted Bible studies. Consequently, in addition to improving their newly-acquired bricklaying skills, this opportunity of togetherness also improved their understanding of Bible Truth.

The wall fence was ready for dedication by the time the President of the United Church of God, aia, Mr. Victor Kubik, visited Chipata on 21 April 2019 in the company of Mrs. Beverly Skogen Kubik and Mr. Nick Lamoureux and his wife Megan. By the time of the dedication of the enclosure, the back wall was half way up. However, full completion was achieved three days later on 24 April 2019.

Concurrent with the building of the wall-fence was the construction of a small house for an old couple whose mud hut was on the brink of collapsing. Mrs. Lena had VanAusdle organized funds for this particular project through Good Works. Both Victor and Beverley Kubik formally handed over the keys of this house to the two beneficiaries, namely Alimakiyo Phiri and his wife, Tibeche (meaning “We shall be proud.”). The two were, indeed, proud!

During this ceremony, Mr. and Mrs. Kubik also donated a modest food pack comprising 1 x 50kg bag of maize (corn) meal for preparing nsima, the staple food for many people in Zambia. Also donated was 2.5 liters of cooking oil, 1 kilogram of fine salt, tablets and bars of soap, two blankets and a few other necessities. Members of the congregation also donated items like pots and plates, wooden cooking sticks and items of food. 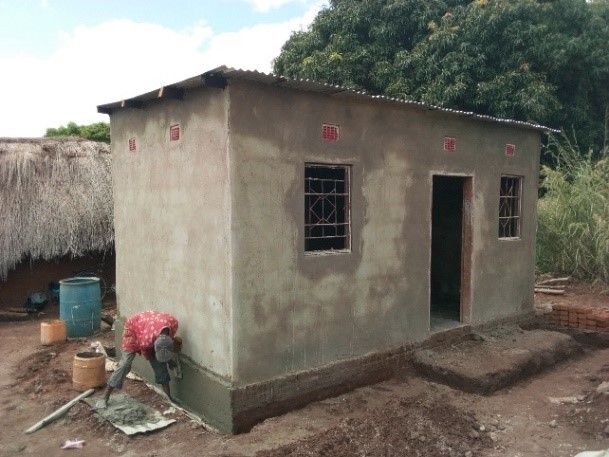 With the security wall in place, the solar-powered water-pumping equipment was now assembled and tested. During the burglary, the thieves had tried to pull up the submersible pump. For that reason, there was concern that the unit might malfunction. But, joy of joys, it responded with a lively whirring at the first strike of the switch and water was soon spurting into the reservoir as if Moses had struck the rock once again! – Exodus 17:6

Needless to say, Chosiwe was first to fetch a bucket of clear, clean and safe water after a seventy-day drought of waterlessness for the hapless community of over two hundred households. And for the Church, this meant resumption of training programs for women in conservation farming, and vegetable production for the youths!

Unfortunately, the funds were just enough to replace the vandalized facility and construction of the security wall. However, by “stretching the pound” as Mrs. Beverley Kubik is wont to say, it was possible to squeeze in the purchase of PVC pipes, fittings and connections for the irrigation system to be laid down. 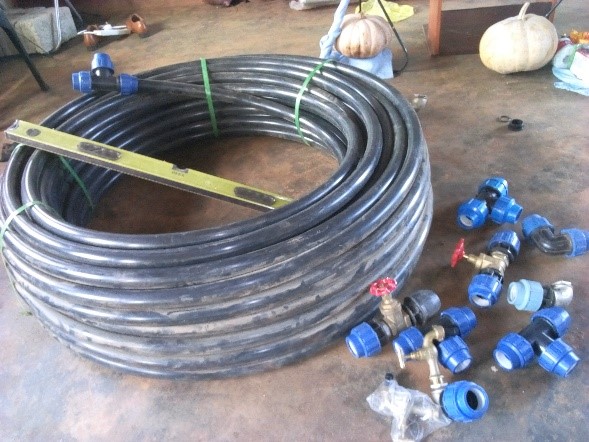 The theft and burglary of the installations at the premises of the United Church of God in Chipata, Zambia, could have led to a falling apart of membership. But on the contrary, it brought the congregants much closer together with a spirit of looking to the Divine One for succor. All the same, it was a drawback on the plans for the elder who had already planned not to renew his consultancy contract with COMACO in order to dedicate more time to the work of preaching the Gospel and spearheading the Church’s efforts to help the poor.

In addition to backstopping satellite congregations in outlying areas of Chiwoko in Katete district and Ngilile in Petauke district, a good part of the monthly stipend from the COMACO consultancy had helped support the local radio version of Beyond Today. The aim for terminating the contract was to focus more keenly on the water facility in order to ensure that it was utilized to its fullest and generating income to support missionary work.

Nevertheless, the restoration of the facility will see the United Church of God, aia, in Chipata, Zambia, rolling full-speed once more towards its vision of helping the vulnerable but viable poor as it continues to preach the Gospel of the Kingdom of God. Yet this would never have been possible were in not for the love manifested by brethren from the United States of America and other parts of the world.