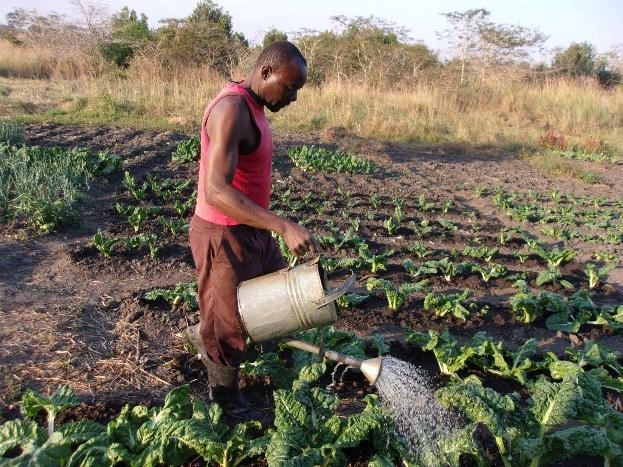 Development of the United Church of God aia in Chipata, Zambia and
Benefits from LifeNets

Being a Catholic was believed to be the proper thing in the small village of Lopo on the eastern border of Zambia with Malawi. This is where I was born on 19th May 1949. Growing up in such and area, I fully believed the Catholic Church was the church that was established by Jesus Christ when He told Peter, “Upon this rock I shall build my Church.[1]” All the other churches were rebels that should one day be forced to come back into the fold or be destroyed.

In 1965 while in a secondary school in eastern Zimbabwe (Southern Rhodesia), I met a teacher from the United States of America who gave me a thin magazine called The Plain Truth. This was the entry point of Christian truth into my life and I began to read the Bible and argue against my Catholic conscience. But there was a battle raging inside me. One part told me that being Catholic was wrong, but the other part told me my parents could not be wrong to belong to a church that had the largest following in the world. This argument went on for twenty-two years until I met Mr. Wilson Saulosi Nkhoma in 1987.

“Don’t lay your spiritual destiny on human beings but on the Word of God,” he counseled me.

I must have appeared hesitant, for Wilson then said, “Jesus loves you, my friend and wants you to be saved. Read what he says at Revelations 18:4[6]. If you still cannot make a decision after reading these few scriptures, then I am very sorry for you.”

Wilson was a quiet-spoken man. But his concern for my spiritual salvation touched me inside.

I read the scriptures that Wilson gave me and the next thing I was helping him with the management of the television program, “The World Tomorrow” on ZNBC[7]. However, I realised that many rural people had more access to the radio than the television. So, being a radio broadcaster by profession, in 2013, I used my small pension after retirement to start a radio program on Explorers FM in Petauke based on the resources of the United Church of God aia and the television program, Beyond Today.

Wilson, who was now a pastor of the United Church of God aia, heard about my efforts and came with his wife to visit me in Chipata, eastern Zambia. When it was time for him to say goodbye, I told him he was not going back to Lusaka until he baptized me. So we found a swimming pool and he baptized me on 20th October 2013.

Since my baptism, I have lived under a heavy burden that urges me to tell as many people about the Kingdom of God as possible before I reach physical frailty. So I moved my radio program Beyond Today, to Feel Free FM which had a wider coverage and where I could monitor it better. This Zambian version of Beyond Today was aired every Friday evening in the local language[8] and every Sunday morning in English. Many people got so stimulated that we started Bible Study sessions in our home every Sabbath.

I never knew that what I was doing was being noticed until when Aaron Dean came as guest pastor at FOT 2014 in Lusaka. I seized the opportunity to feature such an important Church Leader on my radio program. Later Pastor Howard Davis also came and encouraged me. Then came Pastor Lucas, who baptized my wife. It was then a foregone conclusion that my whole family accepted the Truth.

After this, I was nominated to attend a Leadership Traing in Lusaka, then, later, in Lilongwe, Malawi. This improved my skills in preaching about the Kingdom of God and leading His sheep. In November 2014 Pastors Derrick Pringle and Major Talama Nawa came to formally establish the UCG in Chipata and, to my consternation, I was ordained as Deacon by Lukas & Talama on the Last Great Day of FOT 2015. 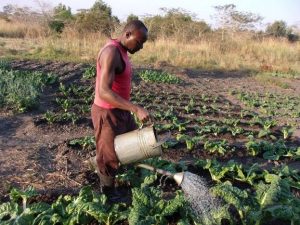 From then onwards, we started to conduct Sabbath services according to laid down schedule. However, after the services and meals, we continued Bible Study sessions in the afternoons based on the twelve-lesson Bible course of the United Church of God aia. Normal attendance of Sabbath ranges from 18 to 42 adults and children who are big enough to understand. We have a very strong youth base. Most male youths were involved in various works around the church including making cement blocks.

The Church was represented by 8 youths at this year's camp while five women attended the women’s retreat earlier on in April. Twenty-five adults are ready to attend FOT 2017 and two leaders, Jeff Daka and myself, have been nominated to attend a Leadership seminar in December 2017.

The Chipata congregation grew and was shortlisted by Major Talama to benefit from the Lifenets food relief program during the food shortages of 2016. But instead of just getting food, we asked for permission to use part of the funds to buy inputs for our members; which was permitted.

Each one of the twenty-one members received one fifty kilogram bag of basal dressing fertilizer, another of top dressing fertilizer and five kilograms of certified seed. Using conservation methods of farming, everyone was able to produce enough food for the following year. Just before harvest, the President of LifeNets visited one old woman’s field and was amazed.

As the congregation grew, room in the house was no longer adequate. Consequently, we decided to construct a building where we could worship. However, getting a plot was not easy or cheap in the fast-growing town of Chipata. So I donated a sizeable area off my small farm, nine kilometers from town and we started to worship under the trees. I further donated cement blocks and cement to start the work.

Later, Major Talama included our project in some LifeNets fund and we were able to buy roofing sheets, doors and windows for our church[9] which Major Talama came to inaugurate on 4th March, 2017.

Our little Church also received other important visitors among whom were Pastor Lewis VanAusdle and his wife Lena, together with Mr Brennan Hilgen and his enchanting wife, Michala. This was followed by our most important visitors comprising President Victor Kubik himself and the LifeNets President, Mrs Beverly Kubik. Our final visitors were Pastor Derrick Pringle and his wife, Cheryl and their guests from Zimbabwe. In short and amazingly, our little church has seen important servants of God expounding the message of the Kingdom of God from its little pulpit.

Our water source was a shallow well that also catered for over 200 poor households around our Church. So the LifeNets President availed a borehole to us at the cost of ZMK38,000. However, instead of just having the borehole as a source for safe drinking water, I committed myself to a lending institution[10] to get a solar facility installed so that we could introduce irrigated vegetable gardening and raise revenue for our Church needs.

The solar water facility is now in place and will be used to train school dropouts in gardening. As start-up capital for their own garden enterprises, each trainee will get 25% of the income realized during his/her training while 75% will go into Church revenue which will help support important activities.

Grabbing the opportunity, adults have also formed groups by gender to produce vegetables under irrigation and will commit 50% of their income to Church coffers while retaining the other 50%. In this manner, we hope to raise resources for activities that require money, e.g. Youth Camps, Women’s retreats, FOT etc. including periodical visits to outlying satellite that have been established in Chiwoko (Katete town), Petauke and other places.

11.1 Sustenance of radio program: In a country where Sunday worship is rampant, our biggest challenge is to persist in telling people about the Sabbath and that there is nowhere in the Word of God that this important law was ever relaxed or God’s Holy day of rest was changed.

The Sunday worshippers are not taking this sitting down and are also using radio aggressively to spread the lie. As messengers of the truth, we need to continue using this strong power of the radio to gradually make the people realize that this is the truth. However, with various activities that require resources and ever escalating prices of airtime, the small pension has become hopeless to support the radio the program.

11.2 Challenge of transport: With 50% of the congregants coming from the town of Chipata, Sabbath services sometimes start late[11]. To avoid inculcating lateness, there is need for us to find means of transporting the urban members to the Church every Sabbath. We have considered applying for a grant from LifeNets to get a a second-hand van.

However, we have received so much support from this charity that we feel ashamed to hold out our begging hands again.  Maybe our revenue efforts, based on the borehole, will make it possible one day to acquire a small van.

Our vision has never veered away from our core work of preaching the good news. In addition to use of the radio and physical outreach, we believe that performing works of charity and alleviating the poverty levels of the people can enhance the spreading and acceptance of the Good News.

Assistance from Lifenets for Chipata Congregation

[9] This support totalled US$3,100 from LifeNets Australia|
[10] Rent-to-Own @ ZMK 18,00 extra
[11] Sometimes services start at 11.00 AM but the local members gather from 09.00 and have to fill the time with hymn practice or discussions.[12] This was further enhanced through local effort into a solar powered facility (ZMK 18,000) that is now additionally being utilized to support dry season vegetable production by members of the Church