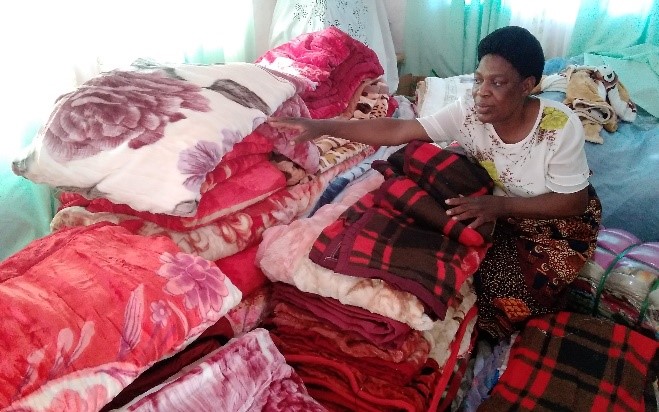 LifeNets and Good Works have had a cooperative working relationship for some time.  Both organizations work together in various countries and on common projects.  The following is a report from Filius Jere in Chipata, Zambia about a Good Works project in an area that has been developed by LifeNets International and LifeNets Australia.

Tibeche Phiri, an elderly widow of the United Church of God in Chipata, Zambia, was one of the happy recipients of the “Blankets for the Blanketless” project initiated by the Houston United Church of God and Lena VanAusdle of Good Works. Estimated to be between eighty-five and ninety years of age, Tibeche and her late husband have been in the United Church of God family from the time it was first established in eastern Zambia in 2015. Her late husband, Alimakiyo Phiri, who was much older, was a dedicated man who was involved in clearing the bush to make way for building the first Church hall in this part of Zambia.

After hearing about the various reach-outs of the Chipata Church to alleviate the situation of the poor, obviously, from Mrs. Lena VanAusdle of Good Works who had close ties with UCG Churches in Zambia and Malawi, the Houston,  Texas congregation enquired about what sort of assistance could be helpful to the poor brethren. With LifeNets assisting with poverty interventions through the provision of clean water infrastructure, hunger relief, and farming packs, and Good Works involved in capital interventions like housing, the basic need for night-coverings straightaway came to the top. 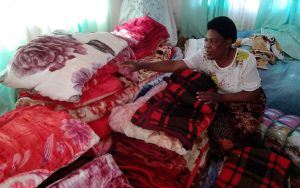 The United Church of God Houston, Texas sourced US$1,200 to buy 100 second-hand night covers. However, by the time the funds were received, fewer blankets and duvets could be bought because of the fluctuation of the exchange rate. Yet, any quantity was quite a lot for people who never had anything at all. So the blankets were distributed to needy members of the Chipata Church and also Chiwoko brethren 89 kilometers south of Chipata and Ngilile Church, 165 kilometers further on.

The beneficiaries mostly comprised orphans, widows, and the extremely poor, some of who lacked any shred of decent night covering and had to endure the extreme cold of the winter and rainy seasons soon afterward. Mosquitoes also always had it easy every night to imbibe on the blood of the uncovered bodies, and malaria was rife among the hapless victims. Hard to believe, some of the luckier ones used old grain sacks leftover after the agricultural crop marketing season to cover themselves at night. 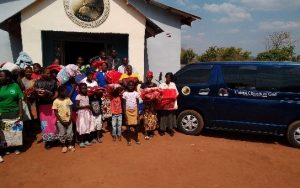 The donation came just when the cold season was tapering off and the poor recipients were looking with dread at the equally challenging rain season that would come after a very short spell of extreme heat. Because of this, the unexpected donation resulted in an outpouring of tears of joy from many recipients.

The most amazing thing is that most of these materially poor people display even greater poverty of the true Gospel and cherish the Sabbath, especially the Bible study sessions that give them a platform to learn more about the Kingdom of God. Mr. Patrick McKee is contemplating assisting even in this through the provision of electronic Bibles in the local languages of Chichewa and Nsenga.

Bales of second-hand blankets and duvets were bought for the needy in eastern Zambia through assistance from Texas, USA organized by Mr. Patrick McKee. Chosiwe, wife to Pastor, inspects items before distribution. 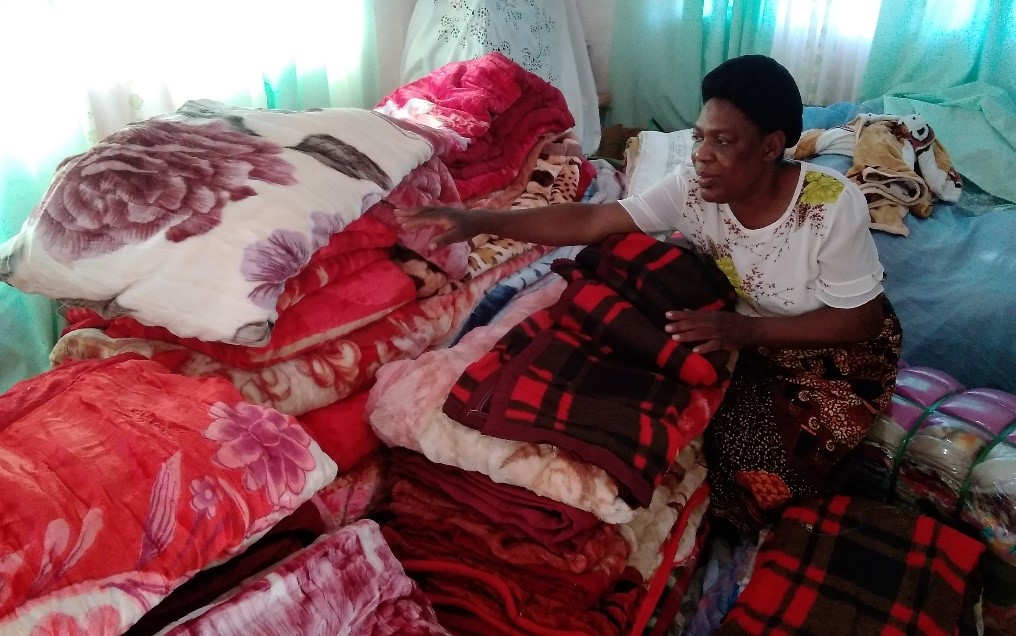 Ngilile brethren in Petauke, 165 kilometers west of Chipata have built their own hall for Sabbath services. LifeNets assisted with roofing, windows and door. The locals have yet to organize funds cement for the floor and plastering of the walls, and later the benches. 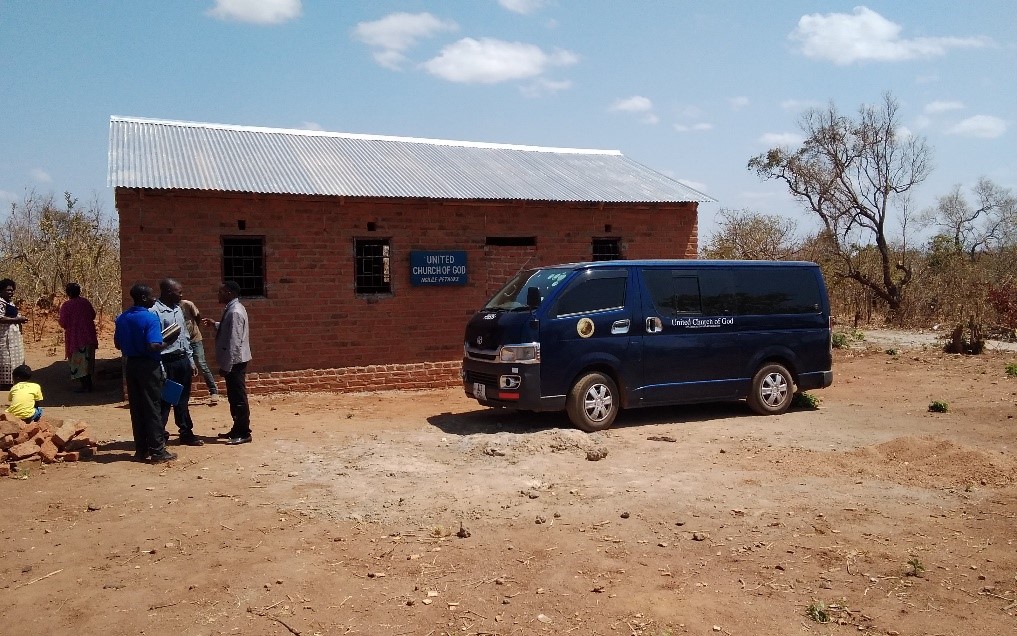 Nineteen poor brethren in Chiwoko, Katete and twenty-one of the Ngilile Church in Petauke  received one blanket or duvet each. This included John Tembo, an amputee.

Able to write and read the Bible, John has been key to the establishment of the Church at Ngilile. 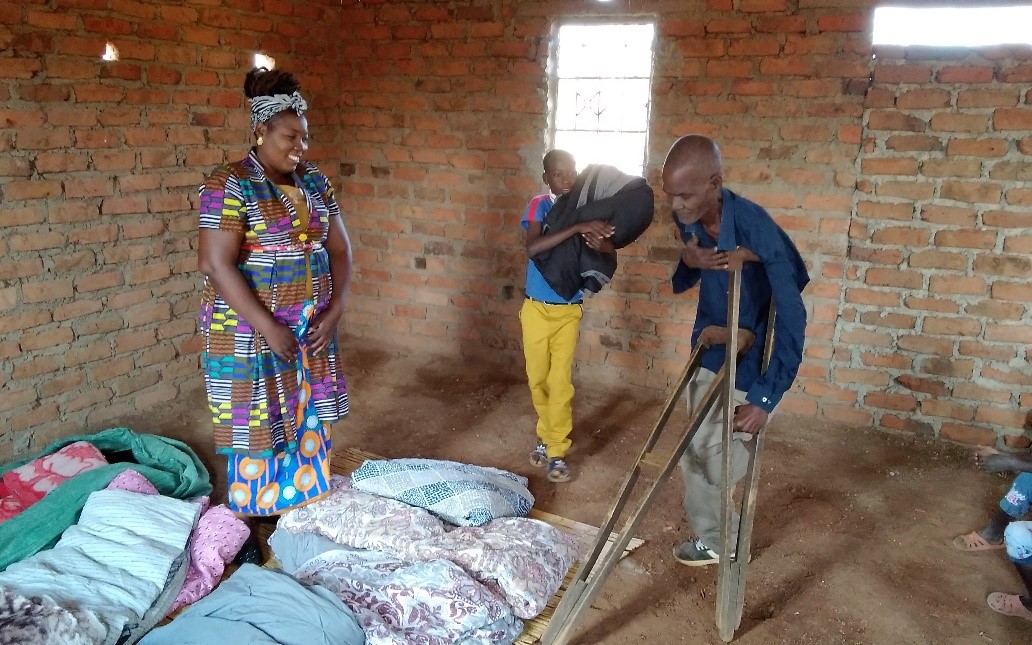