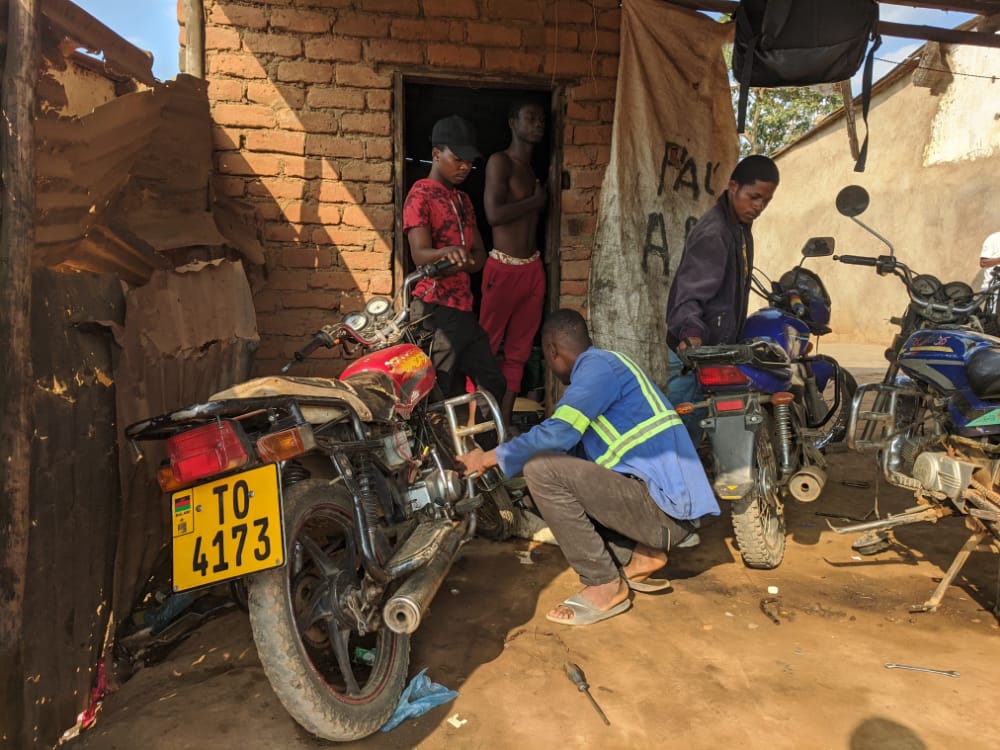 Daniel Ringo who coordinates LifeNets projects in the Blantyre region of Malawi sends this report about scholarship student Kingsley Hussein who became a mechanic and now has an income in a very poor country. This is an insightful report about one of our beneficiaries.

In course of getting to know LifeNets beneficiaries in person, I happened to come across the young and ambitious Kingsley Hussein. 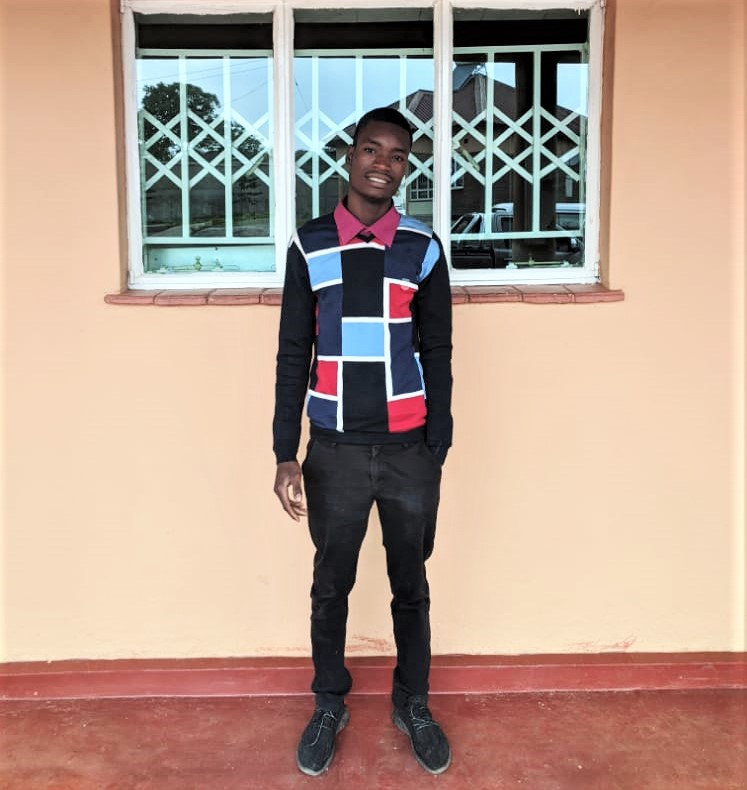 A poor country with a lot of unemployed youth
Unlike in some developing countries, a small percentage of youth start earning a living at the age of less than 24. Unlike men, girls around this age are found to get married and start living independently from their parents but for boys, it is not a bizarre thing seeing young men being dependent on their parents at the age of 27 - 30. A lot of factors contribute to this including late enrollment into school during childhood, lack of vision from youth like waiting to finish college before learning anything that can help you earn a living. As a result, when it gets hard for parents to provide tuition and other requirements for their children, the period to achieve or complete studies gets delayed or worse— shuttered. Well, Kingsley is among the few ambitious and visionary youth who made use of an opportunity and did not let the long-term goals put them off the scent.

Kingsley's ambition for bikes was somehow inborn
Growing up, King loved motorbikes. A bike could not pass him without giving it an eye. Little by little he was able to tell from a distance that the bike coming this way is a Honda, Yamaha, or Lifo etc.. (he was adding some model names to these but the common names were all I could get to memories).
Where some see a problem others see a solution
From my point of view, those that were planning the construction of roads here in Malawi in not less than twenty years ago did not anticipate that the poor Malawians will be able to buy cars that will be filling the single-laned roads in the present time. Because of this, in many of the urban roads traffic jam during peak hours is despicable, little by little many who use public transport are going for motorbikes (not sure if it is appropriate to say motorbike taxi), with that, those hiring bikes are able to travel faster than those on a taxi (cars) and private vehicles. With this development, the rate of bikes in the streets is growing by the day even in remote areas. Bike owners are making a fortune out of the poor road network that we have so are those fixing these bikes and selling spare parts. 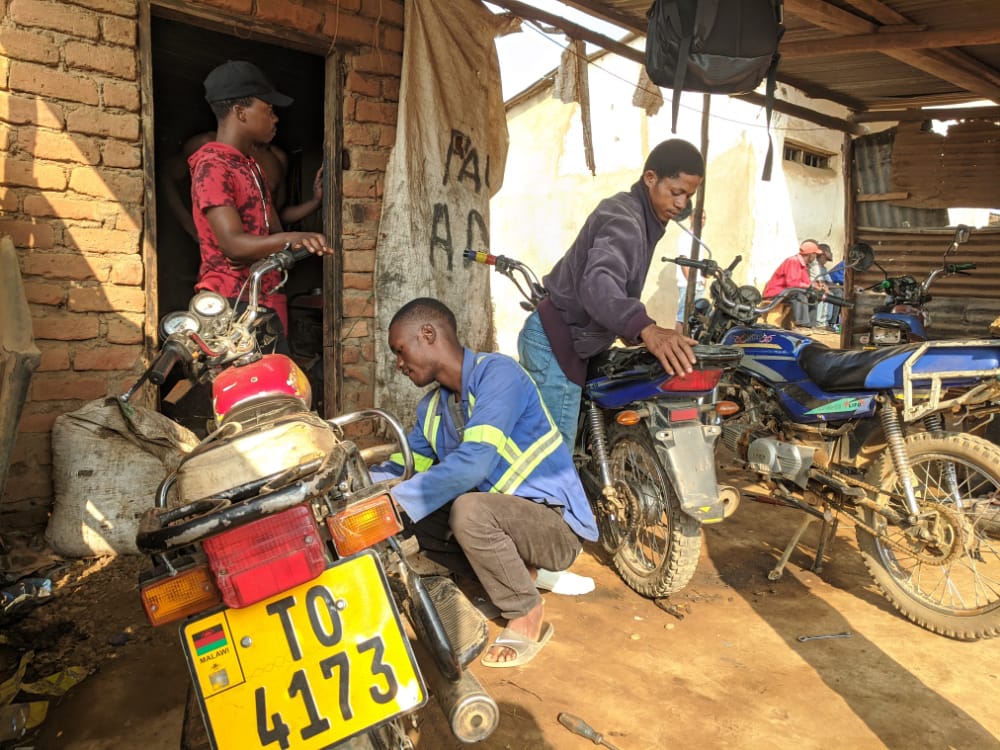 Kingsley in his friend's bike clinic 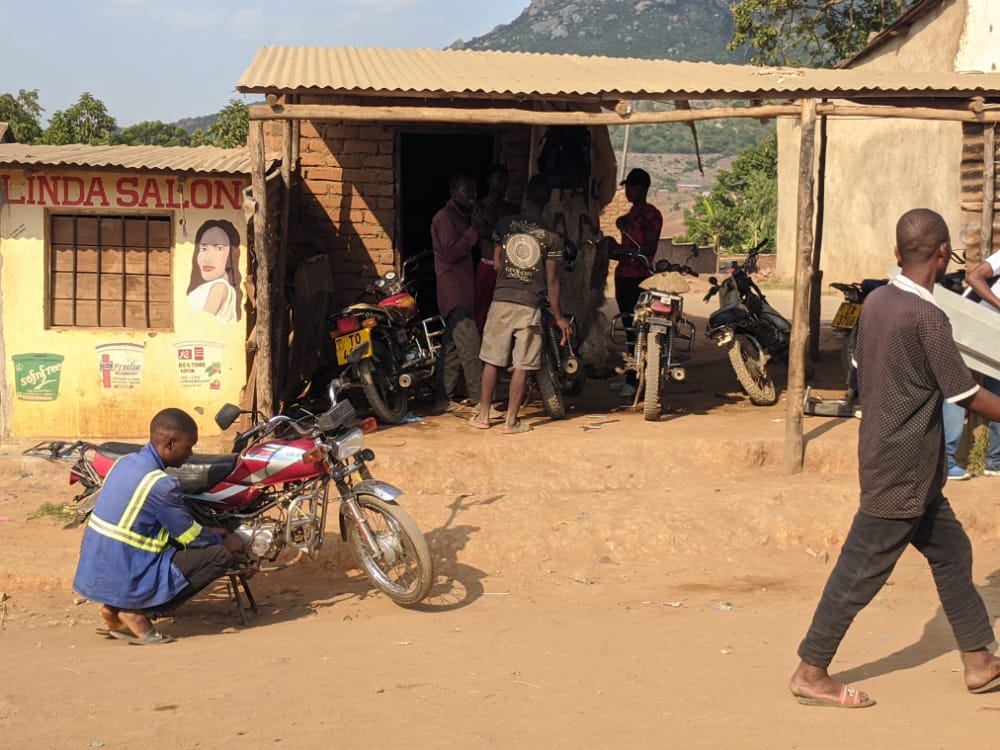 Caught King action. Could not wait to properly park before taking a pic

Back to the young man
When Kingsley was 15 years old (remember at this age here in Malawi, you look up to parents for everything),  He found a friend who was well acquainted with the owner of a certain garage within their neighborhood, his friend used to spend more of his leisure time at this garage, at times King would accompany his friend at there just to admire the job the guys were doing. As time went King also did his best to get acquainted with this place. Eventually, it came to be his norm that on his way from school he would pass by the garage and spend more time there than where his agemates would prefer "playing".
With time his frequent visits to the garage became effective as he later would be sent to pick a spare part here or there or help in just holding some things for those doing the men's job. Through that, he gained enough knowledge to turn him into one of the motorbike mechanics reliable to the owner of the garage. A few years later as he was waiting for his primary school national exam results, he tried to start his own business with a friend but it was not as marketable as he thought it would be. Being young and knowing that there is more knowledge to be gained he made a choice to go further with the school. But when exams were out, His parents had no capacity to give him fees and other school needs, with the huge responsibility that they have looked after him and his siblings, he understood them and thought of trying his luck with LifeNets. Luckily his application for a scholarship from LifeNets was accepted and he is now in form one.
Covid-19 disturbs school. A good time for the young King to be productive
During the just-ended mandatory closure of schools because of Covid-19, Kingsley benefited a lot. He had more time to fix bikes and make himself visible. Through the work he was doing and word of mouth by his customers, Kingsley gained a reputation from motorbike users surrounding his neighborhood.
No reason to limit oneself when you can do more
Kingsley did not only do well at fixing bikes. He also discovered that the engine used in engine/petrol operated water pumps are quite similar like those in motorbikes; there was a time when he had gone to his village, about 150KM from where he stays. There he found people in the village struggling with watering their farms yet he knew at some point in time people used to have water pumps in that village. Upon being told that the pumps were damaged, King was curious to know what might have gone wrong, curiously he requested to see one of the pumps. by the end of his stay in the village, pump owners were happy and appreciative that their boy who lives far from home paid them a visit
A promising future for the young King
Now he has customers who have confidence in him, they come to him without hesitation when they experience any problem with their bikes knowing well that they are taking their problem to the right person.
The biggest challenge that he now has, is TIME. Trying to balance school with the work he does is not easy, sometimes customers find him home just as he is about to leave for school and it gets hard for him to send them back.. Many are times that he decides just to take a peek at the patient and give his prescription but ends up spending more time than expected after which,  it takes him about 40 to 50 minutes to get to school
Future plans
"After secondary school, I have plans to further learn how to fix some other mechanical equipment like motors used in factory machines and more. I understand there are colleges who teach this skill and my pass at this level of study is my ticket there. I thank LifeNets for giving me this opportunity. It is my hope that someday I will be able to win contracts in companies not because they know me but because I am well qualified". Says ambitious Kingsley
Dan R Ringo
LifeNets - Malawi
Africa, Malawi, Scholarships, Vocational
« LifeNets Scholarship Program helps with certifications Angola’s Água Viva School Project Update, October 12, 2021 »