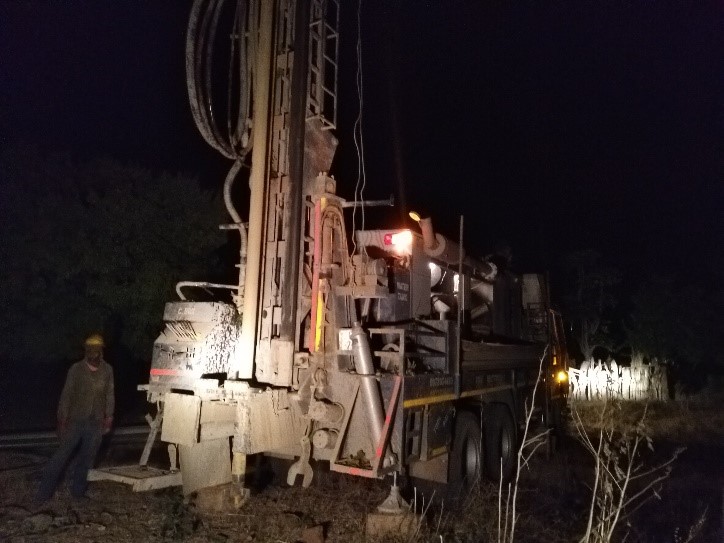 I am glad to give this report about the successful completion of the Borehole Project 2019 for eastern Zambia. It was not easy but where there is a will there is always a way. Now the poor people of Ngilile, Chiwoko and Mazimawe have safe water that should be available throughout the year every year. I have yet to re-visit each site to counsel the recipients about how to manage their facilities properly. I will deliberately time my visits so they flow into Sabbath.

Attached, is my report of the project. I have a lot of photos and will send in a separate mail. 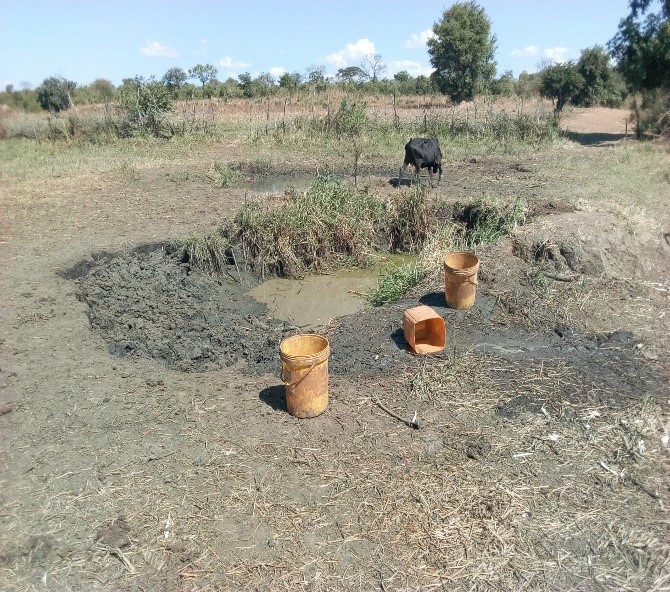 Ngilile villagers share water points with their livestock. If the women delay, the water gets very dirty and they leave their buckets to wait until the mud has settled down. 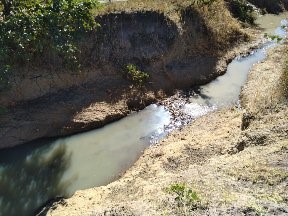 Like Ngilile, people in Chiwoko have also depended on precarious and unsafe sources of water for drinking and domestic use. 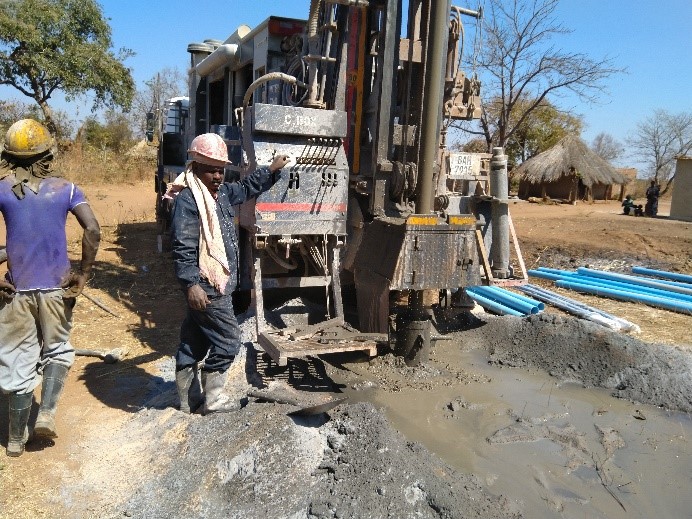 Water is struck at 61 meters and villagers have safe water 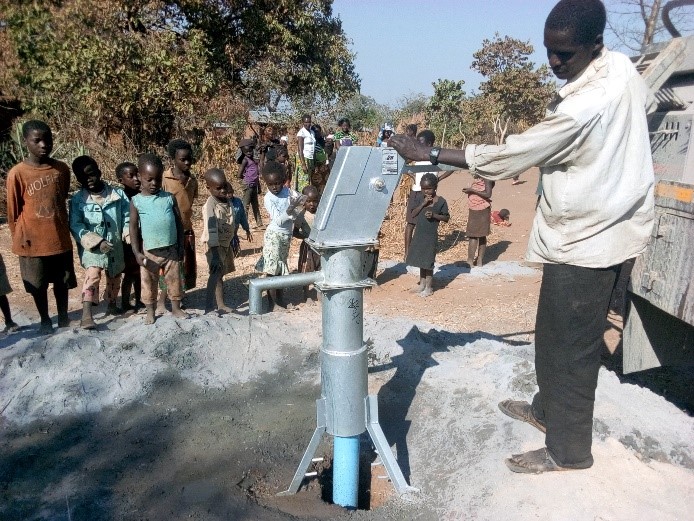 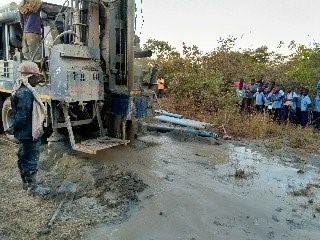 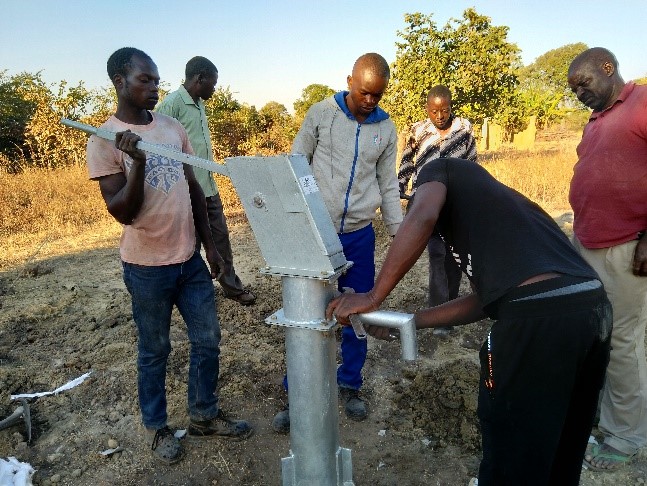 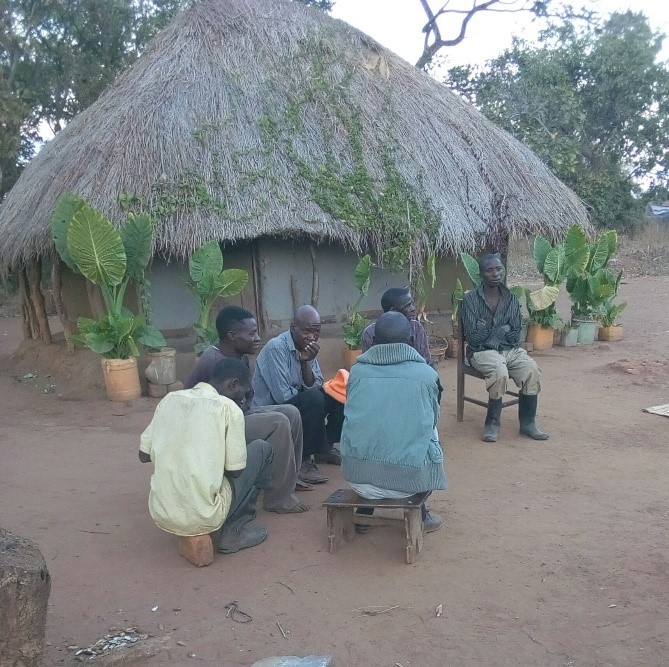 Filius (back to camera, right) meeting Headman Ngilile and his advisors on issue of water challenge and possibility of drilling a borehole in the village. 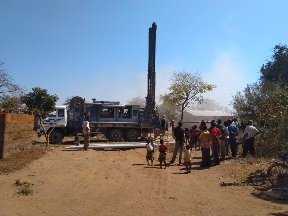 After meeting the targeted beneficiaries and carrying out a lot of preparatory groundwork, drilling truck arrives at Ngilile. Villagers gather anxiously 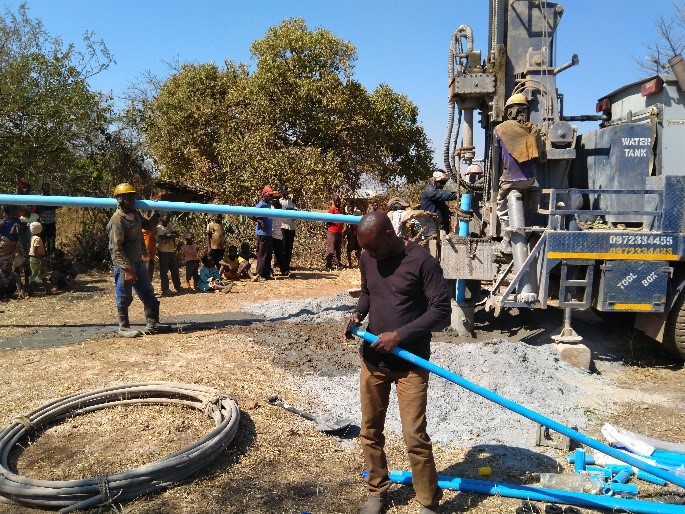 PVC casings being fitted to prevent collapsing of borehole walls 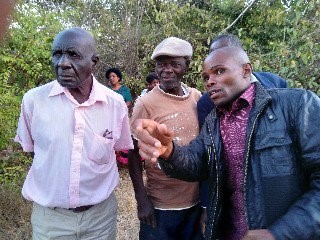 Drilling advisor briefs Maziathonya Ngoma, the Chief’s Senior Advisor about what is happening 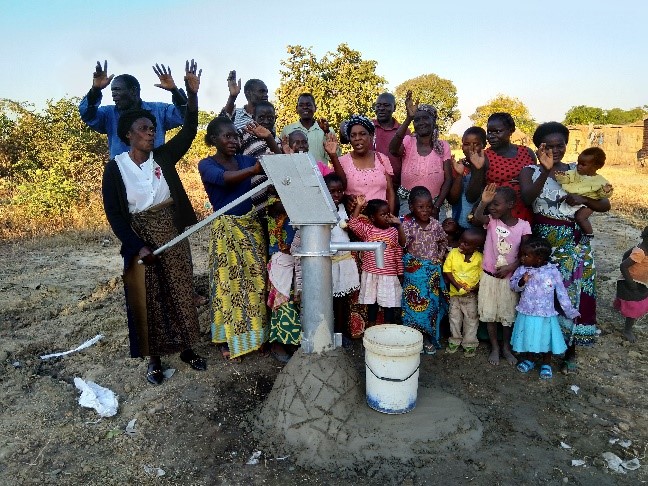 Chiwoko villagers can’t believe they have safe water at last!

The United Church of God,
an international association,
CHIPATA, Zambia

A project funded by LifeNets Australia

“Since colonial days[1], and throughout all the fifty-five years of Zambia’s independence, our village has never had any safe water for drinking and domestic purposes,” said Acklas Daka the headman of Ngilile village when the first spurt of water shot up from their new borehole. “So, we just don’t know how to thank you for this miracle.”

“I am not the one who must be thanked,” I said modestly, maybe subconsciously emulating Jesus when the rich young ruler addressed Him as “Good Master” (Matthew 19:17). “This borehole has been made possible through funding from our brethren across the ocean.”

“Well and good,” replied the headman undauntedly. “We are very thankful for their kindness. Nevertheless, they would never have come to our aid if you had not communicated our plight to them.”

This was the general feeling at each of the three sites where the United Church of God, aia, successfully drilled boreholes from 10 to 12 July 2019. The result was that now almost one thousand[2] rural people in eastern Zambia will no longer have to compete with their livestock for dirty and unsafe water from puddles and shallow wells that quickly dry up soon after the rain season.

Due to the few number of drilling companies in eastern Zambia and exorbitant prices LifeNets opted to hire Sun Water Wells Limited. This is a Lusaka-based drilling company, winning the contract to drill boreholes at each of the three selected sites. These were Ngilile, a remote village in Petauke district[3], Chiwoko, a satellite congregation eighty kilometers from Chipata, and Madzimawe, a new establishment around the palace of Chief Madzimawe.

Recently, the traditional ruler allocated a sizeable piece of land[4] on which the new congregation could build their church hall. Yet this piece of land might well turn out to develop into the site for many Church functions in eastern Zambia, e.g. United Youth Camps, Feast of Tabernacles and seminars and skills training for the youths.

The quotation was for drilling one borehole at each site, complete with a manual hand pump. However, with time, the Madzimawe site may have to be considered for a solar-powered set-up because of the wider vision of its intended usage in the near future.

Due to the dire water situation faced by the beneficiaries, there could be no room for mediocrity or failure. So, the church elder[5] made the required down-payment of sixty[6] percent of the total charge and developed a precise drilling itinerary with plans to be personally present at each site to ensure that the work was done in accordance with the terms of the contract.

On Tuesday, 9 July 2019, the contractor, moved heavy drilling equipment overnight to Ngilile village. This was a seven-hour journey, over about three hundred kilometers of hilly terrain. Work started at 10.00 hours (10 o’clock AM) on Wednesday, 10 July 2019.

A few months before this, in November 2018 to be precise, a rural project[7] had attempted to intervene in the water challenges of Ngilile village. However, the result was a dry well. Consequently, when the equipment rolled into the village, the poor people who gathered in numbers, appeared doubtful of water being found. It was in view of this, that the Church had paid for drilling beyond the standard fifty meters until a substantial quantity of water was reached.

Exploration revealed the presence of water only twenty meters from the dry borehole and the villagers shook their heads doubtfully. Undaunted, the contractor put down the rig and drilling began. To everyone’s consternation, wet soil was hit at twenty meters and water came spurting like a geyser at thirty meters. Nevertheless, the contractor drilled down to a depth of sixty-one meters and only stopped because of a change in soil formation beyond which it was technically inadvisable to proceed. Everyone was excited and the women, who had borne the brunt of the water challenge, broke into spontaneous song and dance.

Casings were then prepared and fitted into the new borehole to protect the borehole walls from collapsing. Afterwards, an India II hand pump was fitted and tested successfully. After the headman had drawn the first bucket of water, the church elder counselled the villagers on how to take care of their new water facility. He encouraged them to immediately form a Water Committee comprising mostly regular members of the Church and a few other people who they perceived could be useful. By virtue of his status, the headman was automatically an ex-officio member of the committee.

Immediately after completion of the Ngilile borehole, the contractor moved to Chiwoko, which was about one hundred kilometers from Petauke. The borehole site was a further six kilometers off the trunk road. This gravel rural road was rough and sandy, with many trees slowing down the heavy drilling truck. Consequently, the site was reached when it was quite dark.

Drilling started at 21:00 hours (9 PM) and water was reached at twelve meters. However, drilling continued to a depth of fifty-two meters. Unfortunately, the soil formation was unstable and blocked the vents on the casings.

Normally, such a situation could have resulted in the contractor abandoning the work. “But we can’t abandon drilling,” said Mr. Chippy Phiri, the water engineer. “just look at the expectant faces of these villagers. Besides, you contracted us to deliver water and not a dry hole.”

Consequently, he ordered that the work be re-done using drill bits that were bigger in diameter. After this, the casings were fitted successfully. However, it was too late to fit the hand pump, and this was postponed to the next day.

Drilling at Madzimawe was delayed due to protocol which required making a curtesy call at the Chief’s palace to inform him about the work. The chief delegated one of his senior advisers, Mr. Maziathonya Ngoma, to be present during the drilling which started late in the afternoon. Luckily, good amounts of water were struck at a depth of twenty-eight meters, although the borehole went to fifty-one meters. It was too late and dark by the time the casings and hand pump were fitted. After promising the Chief’s Senior Advisor that he would come back at the end of all the work in order to thank the Chief for the donation of the piece of land, the elder took him back to the village.

It was too late to proceed to Chiwoko to fit the hand pump. Consequently, this was done the next day, Friday, 12 July 2019. After ensuring that everything had been concluded according to the contract, the elder paid the contractor the final installment of money and the driller was released.

Without doubt, the borehole project was very successful, and the lucky beneficiaries will no longer have any qualms about water challenges during the dry season. However, it required serious monitoring to ensure that work was done according to the terms of the contract, resulting in unforeseen expenses.

To maximize usage, the beneficiaries have been encouraged to take advantage of unavoidable water spillages by developing vegetable gardens around their new water facilities. Undoubtedly, this will improve their nutrition and contribute to their income.

Yet one major result of this project is the change in many people. Previously, some of them used to deride the few members for abandoning their original Sunday worshipping churches to follow such a small, eccentric Church that worshipped on what they believed was the wrong day. Reports from Ngilile are that Sabbath attendance soon after the borehole was installed swelled from the regular fourteen to above twenty.

Consequently, after everything has been said and done, this work of charity by the Church was an act of evangelizing the True Gospel.