If all goes well for the current students under LifeNets scholarship, in the year 2022 we shall have eight students graduating/completing their studies in various courses six of them are pursuing a bachelor's degree in various courses including banking and finance, business administration, physiotherapy, computer, et cetera

He is happy to tells us that James Namatapanya the "mechanic in making" is now a mechanic, working full time at the same garage he was being trained. You can see his story at https://lifenets.org/the-malawi-mechanic-in-making/.

Reginord & friends at his work

All these are doing well in their studies and looking forward to the day they will graduate and fully put into use the knowledge they have and are gaining. However, there are some courses that offer the students an opportunity to feel and taste the fruits of the career they are pursuing before graduating. This is the case of Reginord Hussein.

The 23 year old Reginord is a second born in a family of 12 and currently in his final year of Motor Vehicle Mechanic studies/training.

I asked Reginord to tell me how his studies are going and what his expectations of the future are as far as his career is concerned. In summary, here is what he had to share.

Reginord in a clean and new work jacket

Being in such a big family with all members depending on the father who happened to have a very limited source of income, the dream of going further with school seemed futile but LifeNets came in to give him and his family hope by sponsoring his studies (his elder brother too) from secondary school up to the tertiary level. 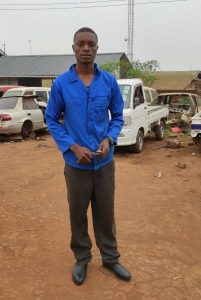 Reginord plans to own and manage a garage in the future.

In 2020, when Covid-19 struck the world forcing schools to be closed, he was privileged to found a garage where he used to work as an intern. months later he found another garage where he now works on a part time basis. From this work he is now able to live on his own and support himself and at times spare a little for his siblings and two nephews.

Reginord says that he does not regret going for this course, for it has enabled him to achieve his desire of lightening his parent's burden of caring for the family by giving him a chance to be independent from his parent's support. He is not able to support his family the way he wants nor have all needs in his house but what seems like a small achievement to some was once just a dream to him and that gives him assurance that there is more that he is and will achieve as a mechanic.

Before LifeNets, he never thought there would be a time when he would be able to pay rent on his own let alone support his parents. His prayer is that he should be able to find a full time job once he is done with his studies and to open and operate a garage in future.

"People refer to motor vehicle mechanics as one of the dirty jobs forgetting that everybody who is doing better at work has or plans to own a car, without mechanics cars will have a short lifespan, we give life to their machines. It doesn't matter if it makes you dirty or not as long as you are earning something from it and you enjoy doing it, some of us won't have fun doing white collar jobs"