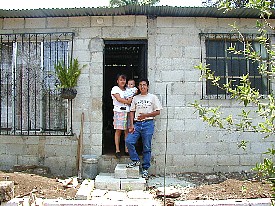 In this post, we would like to give you an overview of some of the Habitat projects that we have done since the start of the United Church of God.

One of our initiatives has been to provide shelter to people who have lost their homes to a natural disaster or have come upon hard personal times where they and their children had no place to live. We have also helped people living in inhumane circumstances where we were compelled to do something to alleviate their abject poverty.

LifeNets has also encouraged and sponsored people who have gone on Habitat for Humanity missions.

Our projects have been diverse and scattered around the world.  We started by providing improved living conditions for those living in poverty. It began in  Guatemala in 1999.  We poured cement floors in homes where people previously lived on dirt. Children who were often without shoes became infected with worms.  We also helped with roofs.  So, it started with floors, then roofs, and then complete homes.

We have documented our projects on our Website at https://lifenets.org/guatemala.   Here are a few notable URL's as well.

We have focused on the greatest need and helped large families who have faced tough times and needed decent shelter for their children. We have helped in Malawi in Africa as well as in Illinois and Indiana. 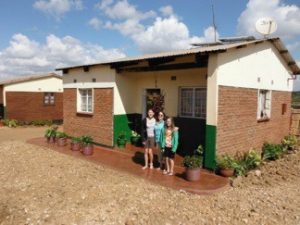 One of LifeNets’ early sponsors George August of Long Beach, California was the first person to bring Habit for Humanity to Ukraine. He worked directly and personally with former president Jimmy Carter, one of Habit’s principles. See https://www.habitat.org/newsroom/2019/jimmy-and-rosalynn-carter-2020-habitat-humanity-work-project-take-place-dominican

George August was a retired Long Beach, CA city attorney whose father came from western Ukraine. By doing a search on the Internet he noticed that village where his father came from was a short distance from where we worked in Khust, Ukraine. He contacted me when I visited Southern California.
George August first set up a scholarship fund in his father’s name and helped many graduating high school students in Uglya, Ukraine go on to college. He did this through LifeNets. He also generously contributed to what we were doing, namely setting up computer schools in Khust and other villages. He was supported by his brother-in-law who was a retired Circuit Judge in the San Diego area who traveled to Ukraine to give lectures on jurisprudence.

George August started Habitat for Humanity in Ukraine and had dinner with Jimmie Carter who endorsed and supported his work.  George had asked me to come along with LifeNets, but we were not able to make that large a commitment to a single project, however, we thought it was a wonderful venture.

In 2013 a killer typhoon named Hayan devastated the Philippines.  Over the next few years LifeNets and other entities helped rebuild several homes that were destroyed.  You can see these stores at these links:

Then we helped those who lost their homes in Sri Lanka in the 2004 Tsunami. We sent volunteer workers to Sri Lanka from California

How LifeNets Changed the Life of the Husseins in Malawi